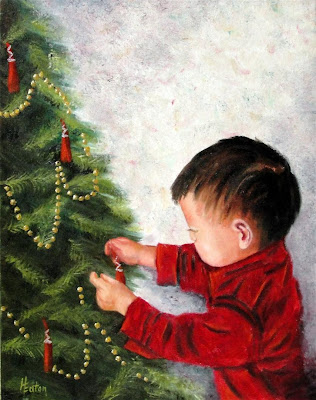 When do you decorate for Christmas?

We do it the day after Thanksgiving, and it has become a tradition we love.   It seems like just the other day, we had a toddler bringing ornaments to put on the tree, and a baby helping to hang his special ornament. Now, one has a husband, and one is on the other side of the world.  Some parts of our event change over time; some stay exactly the same year after year.
Our tree is very beautiful - no nothing matches, and no it doesn't have a theme.  But, suits our family perfectly.

I don't think we get to decide which traditions will stick.  I think they just sort of happen - then happen again, and again.

Thanks to Micah for letting me paint him as he put ornaments on the tree for the first time.  I wonder what will traditions will become important in his family...

Canoe in the Smokies

How often does something truly exceed your expectations?

We wanted a "grown-up" vacation, but we weren't  sure what that meant or how to go about finding it.
So, we started with questions.
Where's a calm area of the country?
Where's a beautiful area we haven't seen?
Where's an airport that doesn't block our free air miles on the days we want? (Actually, this is the one that trumped the others.)
We settled on the Great Smoky Mountains.

It seemed like a good time to try a bed and breakfast, so I did a Google search, found one with a room available, clicked, and we packed our bags.
We'd stumbled onto a place called Berry Berry Springs Lodge. I"m not sure how to explain it without sounding like a paid advertisement. 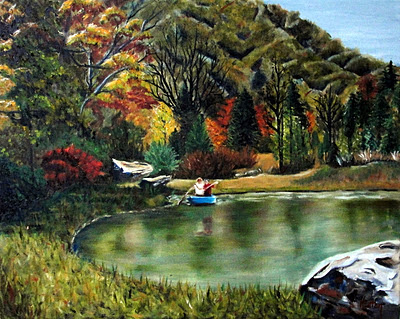 This painting was taken at one of the ponds on the property.... sigh...

Enjoy a beautiful and peaceful Etsy treasury (collection of related art pieces and vintage items) that includes this painting.  It's called Gimme a Break.  Then click Olaces We Dream to Go then dream about going to those dreamy places!

What do you miss about summer?

One of the things I love about living in Northwest Arkansas is that we get a little of everything with the four seasons.  Right now we're at that kind of in-between stage.  Autumn was gorgeous, but the winds have blown in.  The leaves are brown and wet, and the lovely things about winter are a while away.  I guess these in-between weeks make us appreciate the best each season has to offer.

During this brown stage, I've been missing the wildflowers.

Mount Magazine State Park is the place to go in June if you love wildflowers and butterflies.  On a short stroll along the trail, you can see butterflies of all colors on wildflowers of even more colors.
A little research helped me discover that this wildflower is a Gaillardia.   (I think!)  I would have just called it a red and yellow daisy!  Whatever they're called, they're lovely. 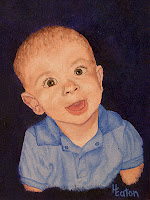 What makes you smile?

I smile...
...when my pup cocks her head sideways like she's asking a question.
...when my students write something with real voice.
...when my husband buys me a Coke from Sonic.
...when the leaves are red, gold, yellow, and orange.
...it's Friday afternoon.
...my mom says, "You're my baby."
...I talk about my son or daughter.
...I get a message that someone likes (or even better buys) one of my paintings.
...When I hold a baby and look into his or her eyes.
How lucky am I that I get to do just that every Sunday morning.

How often does something truly exceed your expectations? 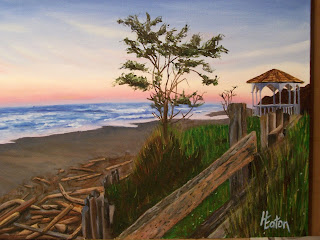 When my kids were about 10 and 13, we took a vacation to the Northwest.  We visited Seattle, a termperate rain forest, Mount St. Helens, Mount Ranier, and Olympic National Park. Every place we went was absolutely wonderful.  But the biggest surprise of all was a place called Kalaloch.  We stayed in a cabin that overlooked the gray Pacific Ocean. From this gazebo we went down stairs that took us to the beach and driftwood below. I remember the my son chasing my daughter with a dead crab, them crawling over driftwood like an obstacle course, wearing jackets even though it was July, people circled around driftwood fires... It was completely peaceful.  We only had one day and night in this place, but my husband and I have promised that we will return someday. 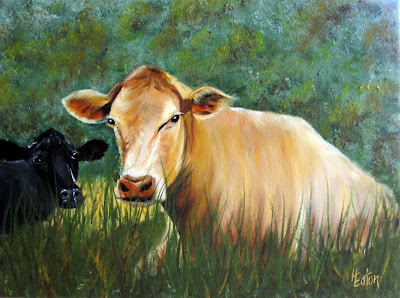 How do you feel about cows?


They look so peaceful and calming in photos, paintings, and from a distance.  Up close they kind of have an expression of curiosity, even annoyance for being bothered.
A farmer might feel soothed by their slow movements, snuffles, and moos.  As a farmer's daughter, I do feel all of those things too, but I haven't been off the farm so long that I've forgotten the less serene side of cows.  Things like the fact that they mostly like to get out of the fence on Sunday morning or Christmas day.  They also smell bad and don't do a thing to help that situation.  They usually choose to have their calves in the deepest gully on the coldest morning. 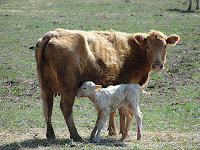 Oh, all that's true, but for some reason, I have to watch whenever I pass a field cows.  I do have a fondness for them.
Just look at this darling little momma and calf!


Click on "Moo Too" if you'd like to purchase the painting.
Posted by Helen at 5:33 PM No comments: 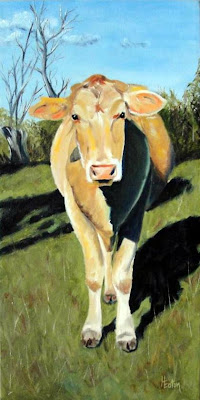 
I have a very early memory about being a farm girl.  I must have been only 4-5 years old when I had the job of guarding the opening.  My dad was trying to get the cows to go into a certain place in the barn and of course the cows wanted to go anywhere but there.  So, someone had to block any possible exits that the cows might find.  Guarding the opening meant that I had to stand in a certain spot so that the cows wouldn't try to escape from that particular route.  I'd never felt so little!  I stood there, all of 40 pounds, holding a stick in order to intimidate any 1,000 pound cow who came my way.  I have a distinct memory of crying, bawling in fact.  When my mom came over I sobbed that a big cow had stared at me.  (Now, I know that the phrase "'cow eyes" means big, soft, and filled with love.  Well, as a tiny little girl guarding the opening, cow eyes were huge and scary.)  My mother told me, "Of course, she's staring at you!  You're so pretty!"  (...awwww... How do mom's know just the right thing to say?)  With a new confidence I was able to wave my stick and guard that opening until the job was done. 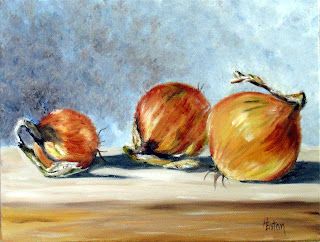 What's in the bottom drawer of your refrigerator?

This painting was done as a submission for Rookie Painter.  Have a look.  It's fun to see the varied artists' styles.  Each is just alike... and completely different!