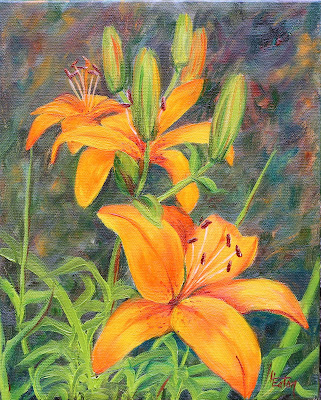 If you've followed me for a while, you might be thinking... Really? Another lily?  Well, yes... another lily. I don't know how many I've painted, but I like them all! Click HERE to see a few.

I know, I know there dozens of other kinds of flowers to choose from.  But... I do love a good day lily... or tiger lily... or stargazer lily...  That alone should be enough reason to paint yet another one.

There is another reason I've been practicing orange lilies though.   In a few weeks my painting partner, Julie, and I are going to teach another class for senior citizens, "Oil Painting for Beginners - Floral."  We loved doing it so much the first two times that we decided to do it again. First we did an apple. Then we did a bluebird. Next we'll do a single tiger lily.  I'm just painting a few different examples for them to have as inspiration... different backgrounds, different leaf styles...

Also I'm doing them to be sure I'm confident enough to teach someone else how to paint one! 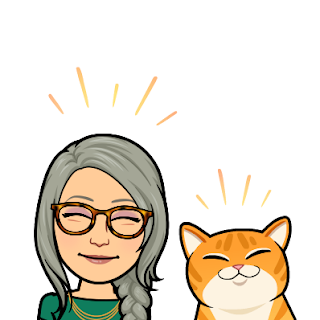 
The forecast called for snow or sleet, and it was below freezing. The cat and dog were in their beds, the fire was dying, and were locking up for the night... but we heard a little meow... odd... There it was again... Ron opened the front door to a little buff colored shivering kitty.  He closed the door again... "Meow..." I texted a few neighbors... No one knew of a missing buff colored kitten... And, no one offered to come pick it up from our porch. "Meow..." Ron said, "Well, we can't just let it freeze." He opened the door and picked it up.  It purred, and massaged its little feet into his chest. He sighed and shook his head with a resigned grin, "Go fix it a bed and some food." Yay!!!  I put bedding in the little red wagon in the garage and filled some bowls with food and water.  He was a loud purr-er for such a little thing.

The next morning, we put him out so he could go to wherever his home was.  As Ron drove off for work, he called that the little guy was just sitting under a tree.  I didn't see him most of the day, but.... We decided we'd let him sleep in his wagon bed in the garage one more night.
Today was warm.
We put him out so that he could go home. 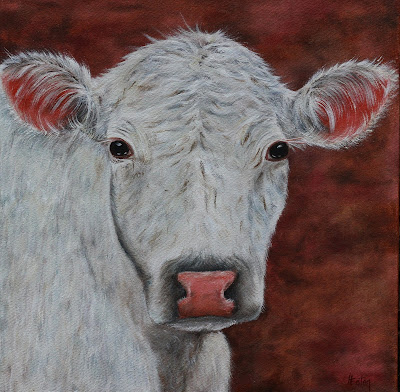 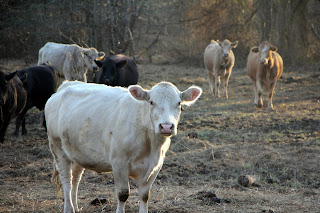 On Christmas Day, we went on a cattle drive... Well, on a drive to look for some friendly cows that might like to pose for my camera.

We didn't have to drive long before the the paved roads became dirt roads. Things that you see on country roads are so interesting.  You just never know what will be around the next curve or over the next hill.

These girls were curious and friendly and came right over to the fence. They were just what I wanted, but I'm pretty sure I was was a big disappointment to them... standing there talking to them, taking their picture with out a bit of feed or hay to offer.

This was the perfect little herd.  They weren't afraid to come close, and there were several different kinds and colors.  That tan one on the right...She may end up on a canvas some day, but she'll have to wait her turn. I loved this white one with the pink nose and pink ears. Let's call her Pearl. 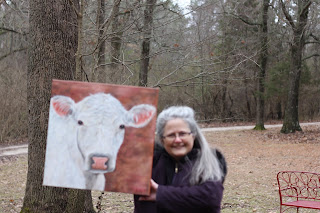 Cows are really huge.  If you haven't hung around with any lately, you forget how really big they are.  I thought Pearl deserved to be on a great big canvas.

I'm sure the mailman wondered what ridiculous thing I was up to... chickens running around my feet, wearing pajama pants and a heavy coat, holding up a big cow picture and smiling for the camera on the porch rail, running back and forth checking to see if I got the whole painting in the shot but not the pajama pants or chickens... and what's up with all that gray hair?? In my mind, it's brown with some gray sprinkled in.

Original Oil Painting on 20"x 20" Wrapped Canvas
Click  Pearl, the Pretty White Cow if you'd like to purchase this painting.
Posted by Helen at 10:58 PM 5 comments:

If there are comfort foods, I suppose there can be comfort drinks.
I choose hot chocolate... with marshmallows or whipped cream... Mmmmm...

During the 3+ decades that I was a teacher, I always had plenty of hot chocolate mix in the cupboard.  An elementary teacher can pretty much count on being gifted at least one or two special hot chocolate mixes with cute mugs around Christmas time. I used the last of mine recently.  I guess I'll just have to buy it for myself now.

If you follow or participate in Inspiration Collaboration (and if you don't, start now!! 😁), Here's a little teaser... You might see this pop up as one of the four Inspiration Images in February... I won't tell if you get an early start for your submission!

Original Oil Painting on 6"x 6" Wrapped Canvas
If you'd like to purchase this little painting, click Hot Chocolate II .
Posted by Helen at 9:46 AM No comments: 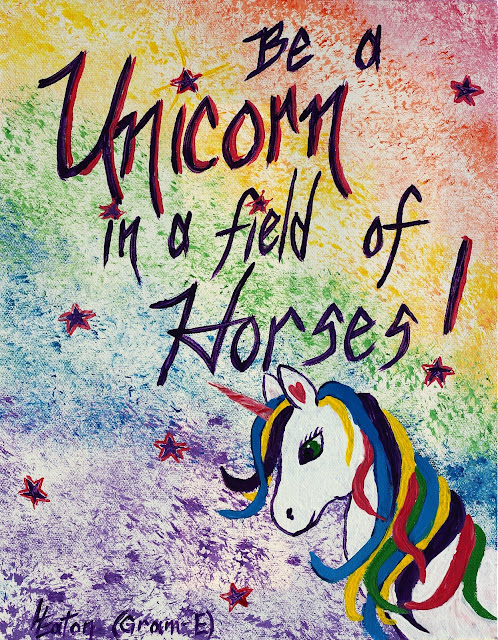 What do you get when you have some sprinkle-covered cupcakes, lots of pink balloons, and a unicorn? 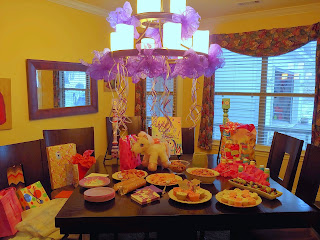 You have a party!!

My precious little one... Be the unicorn in a field of horses. 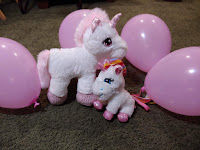 Stargazer Lilies will always remind me of my momma.  She had a long row of flowers that she loved... irises, day lilies, tiger lilies... One year I bought her a pot of blooming stargazer lilies for Mother's Day.  After they finished flowering inside, she replanted them into her row, and they bloomed again every year.  We dug those stargazer lilies up when they moved to Northwest Arkansas and replanted them beside the porch where she continued to enjoy their beautiful pink blooms each summer.

This particular stargazer grew in my own flower bed. 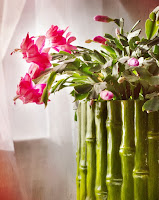 I painted this as part of  January's Inspiration Collaboration.  As soon as I saw Sara's Inspiration Image and read about how this Christmas cactus was a reminder of her mother, I knew exactly what my response painting would be.

Anyone is welcome to join in this creative community... painters, quilters, photographers, potters, poets... Click HERE and have a look. Maybe you'll be inspired to collaborate with us! And click HERE to see the reveal page. Maybe you can add something you've been inspired to create!  I hope you do!

Happy New Year!
from Helen, an oil painter in Arkansas,
and Sara, a photographer in Nova Scotia!

We invite you to join us in a monthly project of creativity.

Here's how the project came about:
We realized we both needed a boost in our creative processes. Sara wanted to add more color to her photographs. Helen wanted new and different subjects to paint. We decided to collaborate and look to each other's work for inspiration. As our plan began to take shape, we realized that our creative friends might like to join us.

If you'd like to join in, it's simple. Here's how:
1. At the beginning of each month, we'll supply inspiration images or thoughts.
2. Choose one (or more) to use for inspiration in any creative way that you want (painting, collage, poetry, story, drawing, photography...).
3. At any time during the month, send a digital copy of your creative work to us, and we'll "reveal" all the creations.
4. We'll need your name, your image or document, and its title. You may also send your social media info if you’d like to have your image linked. If it’s not obvious, let us know which image you used for inspiration.
Enjoy the process!

Click Inpsiration Collaboration  to read the stories behind the images of the month, to download the one that inspires you to create, and to view the work of others who participate.

Here are the four Inspiration Images for January.
(You can click on each one to read the story behind it.)
Which one will you choose?