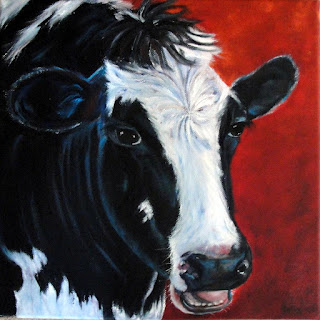 Do I look fat in these spots?

I think that is what this cow is saying.

I grew up on a beef cattle farm, so I really didn't "know" any Holsteins.  But, when I was working on the funny little tuft of hair on this gal's head, it triggered a memory of a trip my family made through Wisconsin when I was a kid.  There was a town there having a Harvest Milk Days festival.  They put those three words together to name their giant black and white cow that was in the center of the town.  Her name was Har-mil-da!  Oh, what a perfect name  I may have to paint another Holstein just to get to use that name!

I met this particular cow at a dairy beside an antique store near Eureka Springs, Arkansas.  I didn't buy any antiques, but I did take lots of pictures of the cows!  I particularly loved this one because it looks like she's talking.

Beauty and the Beach

Why did I choose this photo to paint?

I've painted my son twice (in In the Tree and in My Boys), but I'd only painted my daughter once (in Flower Girl and Her Kitty).  I guess I was waiting for the right  photograph, and I knew this was it as soon as I saw it.
I love the simplicity of the landscape and horizon.
I love the off-center composition.
I love the pop of red that makes her the center of attention even though she's near the edge.
I love the way the scarf is billowing which tells me it was a windy day.
I love the relaxed tone that's conveyed with her bare feet and pony tail.
I love that her husband must have thought she looked beautiful so he snapped the picture.
Posted by Helen at 6:47 PM No comments: 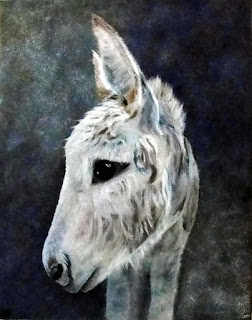 Who's that next door?

Meet LeRoy.
LeRoy lives next door to my parents.  He's a scruffy little thing - on that fine line between adorable and ugly.  He's very friendly though.  It was hard to get a photo of him because he kept trying to walk right up to me.  I'd scoot back; he'd follow.  Finally he got distracted by something long enough for me to snap his picture.

As I was painting him, I kept thinking of stories I might write about.... Then I put the three tiny white highlight dots in his big ole' black eyes... I just sat back and said, "Well, hello there!"  It amazes me when that moment comes for the painting to become real! 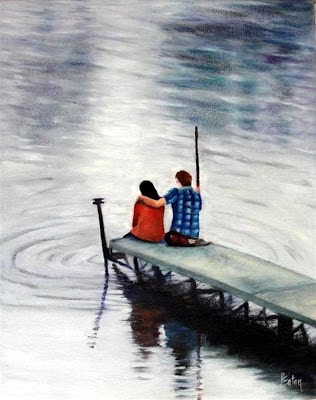 How do you choose the title for a painting?

Choosing a title is one of my favorite parts of the process.  It's the step that finishes (or maybe begins) the story of the image.  The instant I saw this image on a Facebook post, I knew I wanted to put those colors and shapes - that story - on canvas!  But, I had no idea who the couple was... what they were doing... where they were...  In other words, I saw that there was a story; I just didn't know what the story was.
What fun it was to send images of the painting to my friend along the way!  But, in the end I couldn't pick the title because I didn't know the story.  So, I asked her to choose.

I've asked her to step in and tell the story.  Here are her words:

There are people who touch your life at a time or in a way that leaves an indelible mark and, even if you are never together again, the bond remains.

This painting is about two of those for me.

Thirty years ago, I spent a summer working with Helen setting up kids’ camps and clubs, living in different towns each week, having no one to depend on but each other. The challenge was made delightful because of Helen. After spending 10 weeks together 24/7, we returned to our separate worlds as if that chapter had never happened. Our spirits, though, remained entwined, as we discovered after finding each other again on Facebook.

On Mother’s Day, I was given a photo of my son and his girlfriend that I posted. Seeing it, Helen commented that it would make a great painting, and, so, the process began. It has been fascinating to watch the metamorphosis—which at one point included a large duck behind the kids. As it came near to completion, Helen asked what I’d like to name it.

Such pressure! I’ve never named “art” before. So I thought.

The photo was taken by a true and loyal friend—the second in this story to leave an indelible mark. He has been my friend since my son—in the painting at his current age of 20—was two years old, the time at which my life took a turn that forced me to raise my children alone.

After many years of camaraderie, I was very surprised when a mutual friend said to me “he’s in love with you.” It’s not what I expected, but it was true. He wanted to marry, but that was not to be. He did, however, remain a devoted friend and has been the only man in my son’s life.

I wanted the title to somehow reflect that, so we settled on “Dictys' Devotion.” Dictys, in mythology discovered Danaë and Perseus inside a chest that had washed up on shore. He immediately fell in love with Danaë and wanted to marry her, but Danaë didn't want to marry. He treated them well, however, and raised Perseus as his own son.

It took one person who is woven into my soul to provide the means for me to thank another.

What kind of cow is this?

That's what I called to ask my dad yesterday.  Now, I know that my dad has been a farmer for 86 years and was an agriculture teacher for 20 years; so what made me think I'd just get a short answer...

ME: Hey, Dad.  What's the breed of cow that has a black body and ears but a white face?  I thought I remember you calling them a black baldy, but I Googled it.  There doesn't seem to be a breed named that.

DAD: Yeah, that's a black baldy.  It's not an actual pure breed, but that's what farmers call it.  The black baldy is a cross breed between an Angus and a Hereford.  They do that to get the best of both breeds.  It's best in the first generation cross.  See, if you can get 900 pounds of beef from the Angus and 900 pounds of beef from the Hereford, you might get a calf that would go up to 1,000 pounds.  The male gene has the dominate black hair, and the female gene has the dominate white face.  So, the bull would have been an Angus, and the mama cow would have been a red Hereford... good hybrid... gentle like the Hereford, strong like the Angus... other breeds are done the same way... and on and on...

So... how about my curious little black baldy! Isn't she a pretty little heifer!

This little painting was fortunate to be part of an Etsy treasury (collection of related art pieces and vintage items) called Bold.  Click to have a look.
Posted by Helen at 7:21 AM No comments: 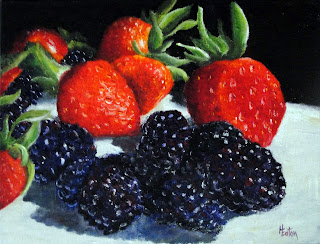 What is the taste of summer?

There's nothing like picking a berry, giving it a little blow to knock off (most of) the garden dirt, and taking a bite! Right at that moment when it's still warm from the sun and juicy from the vine, it's the best flavor ever.

When I was a kid, my two neighbors and I picked wild blackberries and sold them on the dirt road beside our mailbox for 50 cents a quart jar.  (I bought a quart of them at the farmers' market last Saturday for 6 dollars! And, I didn't even get to keep the box they were in.)

We had a certain routine for our blackberry picking - and I want to say in advance that nearly every bit of this whole process seems completely unsafe and just wrong now; however, back in the 70s, it kept us from getting bored.

I'd forgotten all about this process until I was working on this painting.  It was tricky for me to figure out how to make these purple and red blobs look like actual berries.  I had to stop thinking about them as berries and study the highlights, shadows, lost edges, and reflections.  Then... voila... It still amazes me when it works!

I did this painting as a challenge for Studio Atelier.  Visit the site.  It's fun to see the varied styles and versions all done from the same image. 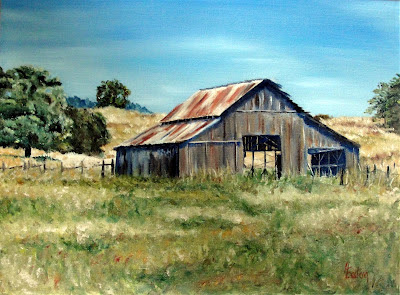 I can't resist them... so much has gone on inside and around them... lambs born, cows milked,  horses fed, hay pitched down, tools stored...

I painted this barn to submit to the June challenge for A Day Not Wasted.  I love to see the varied styles that different artists use to paint the same image.

Have you ever had a wild pet?

When I was a kid we had a lake on our farm.  (You can see a view of it in Lake at Nunnely)  One year a pair of mallards made their home there.  We named them Patsy and Bill.

This couple was part of a community of ducks that live on the river behind the Old Mill Restaurant in Pigeon Forge, Tennessee.  They're used to tourists and completely ignored me as I snapped their pictures.

It just doesn't seem fair that the the daddy duck gets to be so beautiful; however, I think the mama is lovely in her own way.