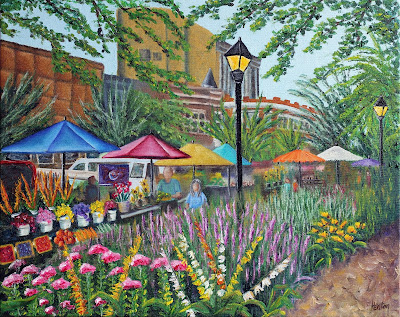 If you come to my city, visit the Square on a Saturday and become a part of this story.
I didn't list this one for sale for a year. I just wanted to enjoy it on my ow wall for a while. Maybe it's that couple in the middle... the tall guy without much hair walking beside his short gray-haired wife...

I've been learning how to use the palette knife.  It takes a lot of practice... how to hold it... how to place, smear, and move the paint... how to trust that blobs of color will eventually take shape.

There's something uncomfortable and unfamiliar about the process of painting with the palette knife, but (I think) I love it.  I use much more paint, and I have to place it purposefully.

There's also something fascinating about the finished product. I'm not satisfied just looking at it with my eyes, I want to touch it with my fingers and feel the shapes.
Thanks to Ahuva Sheiki for making YouTube videos to teach people like me to paint with palette knives. 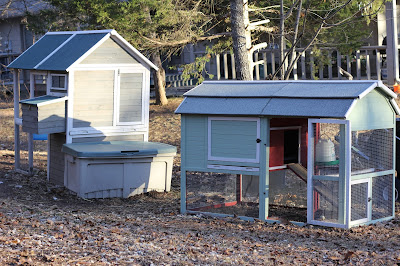 My poor city-boy husband... turned farmer... just shakes his head, sighs, and says, "Ok..." when I ask, "What would you think about me getting a couple more chickens... three?  It's a great deal!  She's going to give me the chickens, the coop, the food, the feeding supplies..." 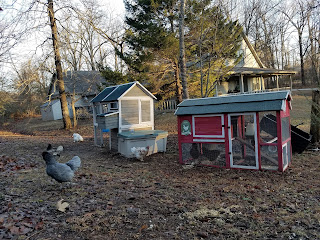 Yesterday was (finally) a pretty day, so I spent a few hours talking them, letting them get used to me, and painting their house green (to match the rest of the farm... wouldn't want them to be embarrassed for not fitting in!)

Here you can see the four white and gray ones coming to check out the new red ones. 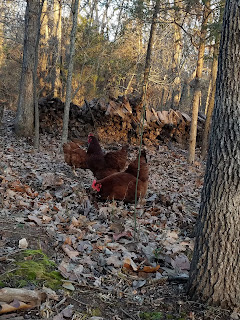 Today was their first time to be out of the coop.  They seem happy to be free.

They're sweet little things... friendly... curious... happy to be out scratching around and getting to know their new area. 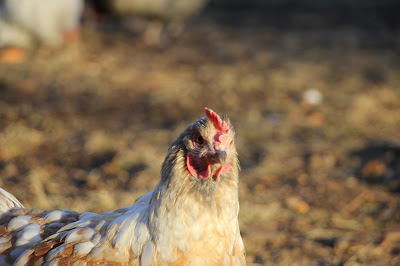 I thought since the four  had had a chance to "get to know" the new three during the week they were in their coop, that maybe they'd be nice once they were all free to hang out in the back yard and woods. 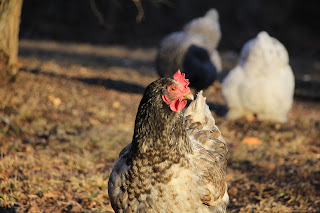 Ummm... they were not exactly welcoming.

Full disclosure... they were mean.

Email ThisBlogThis!Share to TwitterShare to FacebookShare to Pinterest
Labels: chickens

Word of the Year

A few years ago I noticed that a lot of people would choose a "word of the year" as kind of a thought to keep in mind or maybe a new year's resolution.  I don't know if they still do that... probably not... figures that I'd join in that fad about the time it was fading... doesn't matter... I like it. 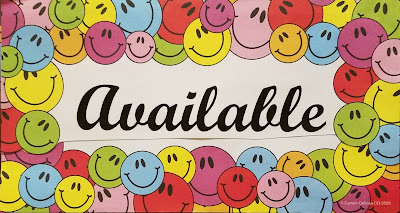 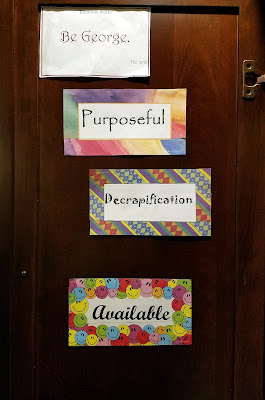 This is the inside of my armoire door.  Nobody sees it except me, but when I take something from the printer or get some office supply, I see these reminders.

They didn't all begin on January 1.  The year of a teacher begins in August, so maybe they're just "Words of the Season" and last until a new one speaks to me.

I guess if I'm going to show them, I should explain them. So... Let's see...
"Be George."
I've had my time as Paul and John... Nobody want's to be Ringo... but George... George was in the background, not the limelight.  He added value, but you forget his name.  He was important, but his role was to support.
Two or three years ago, I began to step back. I'd spent my time in the spotlight... won the award... been the one to willing stick my neck out... taken the mic... put my name on the top. And, I guess, I knew it was time to "Be George" and support the next generation of leadership.
"Purposeful"
Once I realized that last year would be my final year as a teacher, I knew that so much of my life was about to change.  Things would end.  I wouldn't be with many of my good friends every day.  I would be facing many one-last-time events. (One last group of kids... one last Christmas party... one last set of report cards... one last snow day... one last parent conference... one last assembly... one last intern... one last opportunity to...) I wanted to take it in, to savor it, and to be purposeful with every conversation, action, and  attitude.
"Decrapification"
There wasn't a word to fit just what I needed, so I did a very Helen-like thing and made one up.  If you take that word apart... prefix, root word, suffixes... you'll figure it out.
We've accumulated "stuff" until it nearly overwhelmed me.  In the last five years, we lost my mother-in-law, my father-in-law, and my mother.  With the passing of each one, we acquired stuff.  In the last three years my parents moved into a smaller house, then my dad moved into a retirement center.  With each move, we got more stuff.  My elderly neighbor needed help clearing out things, and we got more stuff.  I closed down my classroom that I'd spent 32 years building and filling with all the things a classroom needs.  If purchased with school money, it stayed; however, much of it was mine, and that stuff came home.
Stuff... stuff... stuff!!!
Yes, I've read about the Konmari method... I hate it.  It shows me how much stuff I should let go of right now.  I know people say that "things" aren't important, but they are to me.  I want to touch the buttons and thread that belonged to my mother or the dishes that were my husband's grandmother's.
Anyway... It's a process... I'm still working on it... It's ok...
But, I do not want to bring any more stuff into this house!

I'm anxious to see what "Available" brings my way this year.
Posted by Helen at 2:10 PM 2 comments:

Email ThisBlogThis!Share to TwitterShare to FacebookShare to Pinterest
Labels: word of the year 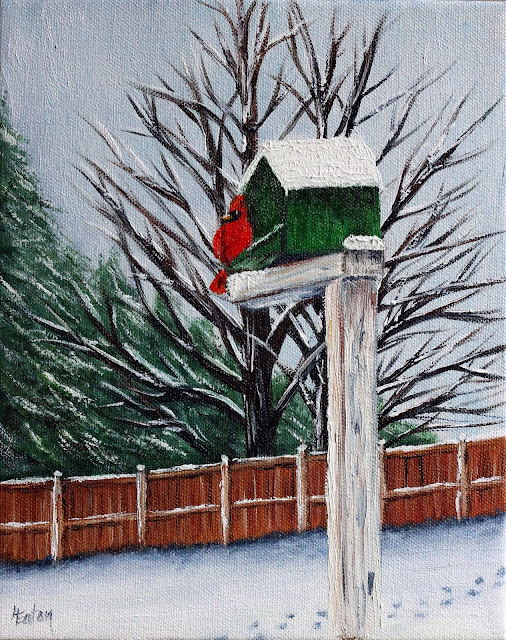 In a world that’s filled with grays, blues, and browns
The glimpse of red is so unexpected.
As the cardinal flits near and lands on his perch,
How can your spirit not be affected?

If there’s a cardinal outside, you want to share it!
“Come look! There’s one!  Another! Oh, there’re four!”
Just glimpses of red… “Wait! Where did they go?”
So you stay near the window just a few moments more.

When there’s a glimpse of red in a world of white. 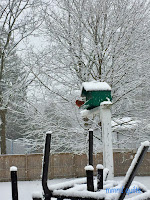 One of my favorite things about being an artist is being able to say, "I can do that for you!"

Sandra of MMM! Quilts posted this photo and wrote  "I like cardinals. That would make the most perfect Christmas card wouldn't it? If I could photoshop out the upside down patio chair legs, that is LOL. When I posted this photo along with two others on Instagram, Tish reminded me that cardinals can be seen as a visit from our loved ones."
Then I was able to respond with this comment. " Cardinals... so gorgeous... It is impossible not to stop and look when they're flitting around in the snow. And... I might just know of a way that your image could be made into a Christmas card with the chair legs edited out... he he... :) 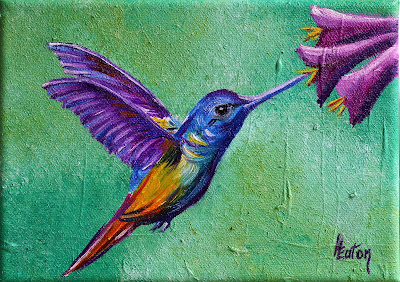 Jolene loved sunsets.
She loved hot air balloons.
She loved her cats.
She loved flowering plants and had a gift for knowing how to make them flourish.
She loved beautiful special rocks and displayed them in her office space, in her home, and in her yard.
She loved hummingbirds and had so many that she had to refill the feeders on her porch every day in the summer.
She loved the color purple.
She was clever and crafty and creative and artistic.

Five years ago we started painting together on Tuesday evenings. She was a lefty and had an odd way of holding her brush, but it worked for her. She was determined to learn, to get it right.  We’d paint on a piece for a few hours on Tuesday then she’d go home and work on it some more.  So often I’d get a text late at night with a picture of what she’d done.  “What do you think?  What do I need to do now?”  Usually the answer was, “Absolutely nothing. It’s perfect. Sign your name.”

A special friendship bond is created when you paint together.  You are in a small room for an extended time, your hands are busy, and you are facing your canvas instead of each other.  All those factors lead to real conversation.  Of course we griped about whatever needed to be complained about (school stuff, politics, news, etc.) and talked about the art we were working on. But, eventually we settled into real talk. Jolene talked about her daughter, husband, her mom, her sisters, her cats, her home – what she’d been doing to decorate or what plants she’d been setting out.  Jolene also loved to talk about things that made us groan… having her aura read and psychic shows and haunted places and UFOs; she loved her paranormal.   And, she sometimes brought a copy of the Eureka newspaper so she could read the police reports to us. (They’re pretty funny… “Officer was called to a residence on Maple to check on cat that wouldn’t stop yowling.  Officer asked the owner of the cat to put it in the house.”) She’d talk about whatever other craft she’d been working on.  And, Jolene talked about the future.  She loved making predictions about what might happen.  Her predictions were always positive.

She was such an encourager.  She’d say specific things she liked about people. She’d give specific praise about paintings.  She’d predict exact positive things that she just knew were going to happen.  I am personally holding on to a couple of those predictions that she made. The last text I got from her was one of encouragement and prediction.  How perfect. 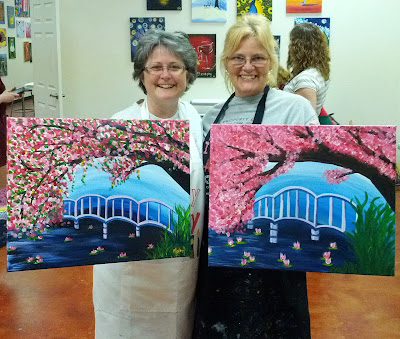 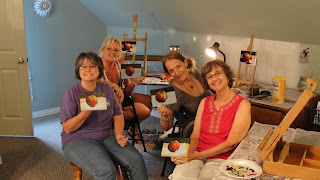 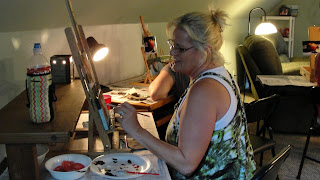 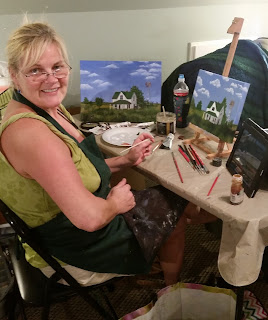 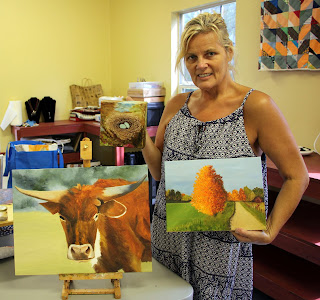 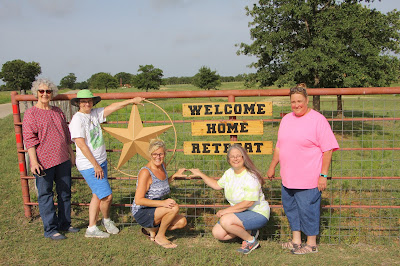