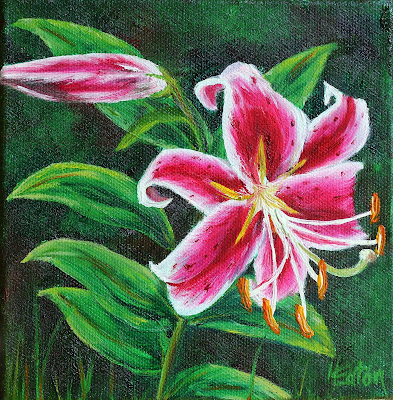 If you read yesterday's post, you know that my art friend Nelvia put me up to a Facebook challenge that I truly dreaded doing. I had some sort of irrational fear of showing my art to people who know me. And, if you read it, you know that it turned out to be the best thing ever.  One reason was getting to reconnect and paint with a friend from college. 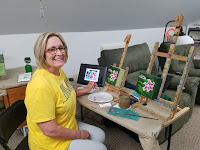 Mixed in with all the sweet comments from friends, came a comment on each of the seven days from Lynn. The comments turned into conversations. Lynn had been my high school Sunday school teacher!  Between moves and name changes and 36 years, we'd completely lost touch but reconnected through Nelvia's challenge!

We discovered that we'd both spent the years as teachers and both happened to live in the same area now. As it turns out, Lynn's always been artistic and longed for an opportunity to learn to paint.

Who knew what wonderful things would come from that little Facebook challenge.
And... yes... there are few other good things yet to add to this challenge story!! 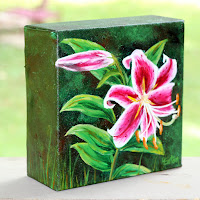 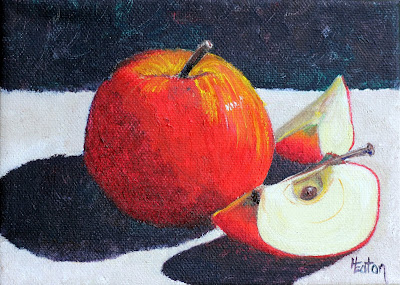 I want to give my artist friend Nelvia a shout out... and... a big thank you.
She invited me to participate in a Facebook challenge to post a paining every day for a week.
If I'm being completely honest, I did not want to do that!
I always put my art out in the world for strangers, but I rarely do for the people I know.  What if they don't like it? What if they are annoyed that I'm posting every day? What if they unfriend me?
How's that for pitiful art self confidence!
Well, of course, none of that happened. It was pretty much the opposite.
People made such nice comments, and friends I hadn't heard from in years  decades reached out! 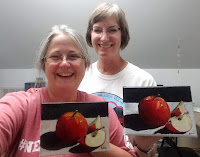 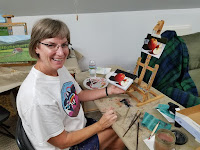 One of those friends was Dayna.  She lived down the hall from me when I was a freshman in college.  Besides a  wedding a few years ago, we hadn't had a conversation in 34 years!  Through a few Facebook conversations, we discovered that we now live in the same area, both retired recently, and both wanted to do art with friend.  It has been so good to reconnect.
I've used this little apple several times.  It's a good little first-time-to-paint picture.
So... thank you so much Nelvia. And... guess what... This isn't the only fantastic thing to come from your challenge... Stay tuned!!

Old Barn in the Smokies

I love old barns... The old wooden ones with the rusty metal roofs... The one like my grandma and grandpa had... Barns that were filled with cows and hay and plows and mules and kittens and ropes and chains and buckets...

Maybe my favorite paragraph ever is the one that describes the barn in Charlotte's Web.

The barn was very large.  It was very old. It smelled of hay and it smelled of manure.  It smelled of the perspiration of tired horses and the wonderful sweet breath of patient cows.  It often had a sort of peaceful smell - as though nothing bad could happen ever again in the world.  It smelled of grain and of harness dressing and of axle grease and of rubber  boots and of new rope.  And,  whenever the cat was given a fish-head to eat, the barn would smell of fish.  But mostly it smelled of hay, for there was always hay in the great loft up overhead.  and there was always hay being pitched down to the cows and the horses and the sheep.

.... Sigh...
Thank you, E.B. White, for painting such a beautiful description with words. 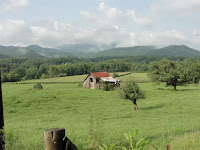 When I started looking for a picture of a barn to paint, I remembered this one that I took this a few years ago when we were in the Smoky Mountains of Tennessee.

I painted it, finished it, and photographed it.  But, didn't blog about it because something wasn't right.  I just left it on an easel and avoided looking at it.
Finally, I sucked it up and really looked at it to see what one little thing or two needed to be tweaked... ummmm... or seven or eight things... 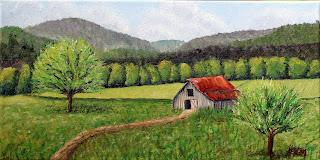 Sometimes the painting fairies come in during the night and make a painting look better than I thought it had.  Sometimes I just have to do it myself.
I love the final finished version.
I can just imagine all the work and joy and stress and daily routines and life that went on in that barn when it was new. 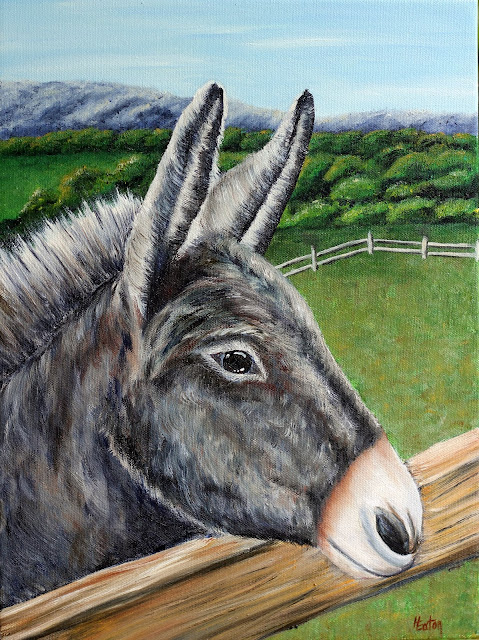 ME: What should I call this new donkey?
RON: How about Don Quixote?
ME: (caught off guard with that response and dying laughing)
RON: How would you spell that? Donkey Hoatey!!!
ME: (still laughing)
ME: I've never read that, have you?  Google it. Make sure it's not some awful character.
ME: (a day later... still laughing)

I know... I know... he looks just like that other one I did a couple of months ago (A Little Gray Donkey - a.k.a. Clip Clop).  My 91 year old dad loved Clip Clop and took him to hang in his apartment where he refers to him as Ole' LeRoy!
I've got a different place to hang this guy while he waits for his forever home.