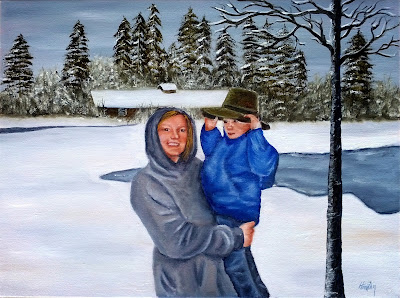 What is it about a face?

Our eyes are automatically drawn to eyes.  Even the infants I take care of in our church nursery each week look directly into my eyes.  Why is that? There are plenty of other interesting things to look at!

It's the same way with a painting.   As I worked on this one, I was pleased all along the way.  I loved being able to create the cold wintry feeling of the sky.  I loved the line snowy evergreens and the scruffy bushes in front of them.  I loved how the house and its drive set down in the background - important yet blending in. I loved the shape of the pond.  I loved the colors  in the snow that keep it from being a flat white.  I loved the wrinkles in the clothes, the little one's hat, his hands, and his attitude... but if the momma's face wasn't right, none of the other things mattered.

I tried to believe all that other stuff was important. I signed it and went to bed thinking it would be fine; but for some reason I didn't clean up my paint palette.  I guess I knew... if I didn't love the 2-3 square inches of canvas with eyes, nose, mouth, cheeks, teeth, eyebrows, chin... none of the rest mattered.

So... armed with a tiny brush, a Coke, and some determination, I turned the painting upside down (so I would focus on shapes and colors instead of "face") and gave it one more hour.

Every feature was in the right place... so what was it?  The tiniest stroke off the nose, the least highlight on the chin, barely a stroke on the edge of the smile, a faint lightening of the eyelid, slight shading on the cheek,  The difference is so slight... and so important...

As a side note... I've loved that pretty face since I first met her when she was a bright-eyed 9-year old in my class. 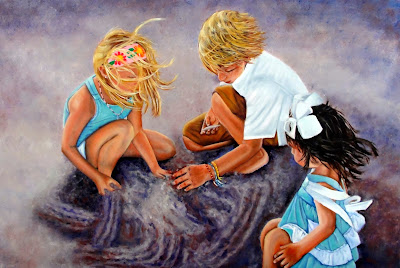 How many characters do you see in the story, and what do you imagine about each one?

The big brother is kind of taking charge of this sand project.  He's in the middle of things, holding the shell to form it just right, maybe even protecting his creation from the little one.  He's obedient to wear the crisp white shirt, yet his free spirit shows through his braided bracelets and shaggy hair.

The sweet little one sits up straight to be just as big as everybody else.  She's got on her ruffly dress, so she knows she's pretty today.  Because she's feels fancy, she's not quite sure she wants to be in on the sand pile.  But, she doesn't want to miss out on being a part of whatever the big kids are doing!

Then there's the lovely sister who's pulling sand up and trying to help build the pile.   Her tank top and shorts are right for the beach; however, she's girly enough to make sure she's got her necklace and earrings, and she's just sassy enough to put on her favorite headband - no matter what color it is!

The kids are great, but the character that I love is the fourth one... the wind.  It may not be visible, but what would this image be without it! The wind drives the story! As it whips the hair and ribbons, it brings life to the story!  The wind is the springboard of imagination! It's the wind that lets my mind wander to where this story takes place, to what these children are feeling, to how loud their voices must be, to the pinprick feel of sand that blows into their skin...

I almost painted this on a square canvas. At the very last minute, I decided against it... The square canvas left out the wind...  That sounds like an "artsy" thing to say, but it's true. (The square canvas told a completely different story - three kids with messy hair were making a pile... that's it... no imagination, no wondering, nothing to hear, nothing to feel...) Those few inches on either side showed where the wind was coming from, what it was carrying along, and where it was going.

Who stands guard at Christmas?

At my house about 30 nutcrackers do.  I didn't set out to have a nutcracker collection, it just sort of happened.  When we were first married, my husband bought one that was on sale during a day when he got an extra discount where he worked.  The next year he bought another one, and he did it again the next year.  Once you have three of something, I think it's a collection.

After that, it really wasn't planned, we'd pick one up every year or so if we loved it and the price was right. So, we had six or seven of them.

Then I took the "collection" to school for E.L.F. Workshop (Eaton's Lots'a Fun Workshop).  I thought it would make a good independent project for the kids to draw and work on while I was helping others with their bigger projects. Well... I guess that gave the kids the idea, so I ended up getting a couple at the Christmas party that year.  The next year I had eight or nine to take for models on E.L.F. Day... Again I opened another one or two at the Christmas party.  Then the next year... and the next year... and the next... 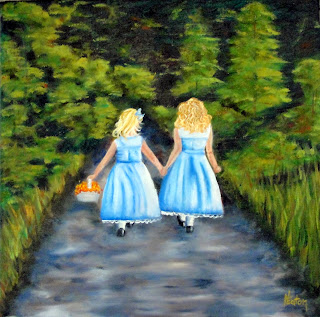 Is it cheating to paint from a painting?

If I'm copying my own work it can't really be plagiarism, can it?  It probably is cheating, but I've done it a few times.  I feel like I'm not supposed to like it, but I really do.  All the struggles, frustrations, and  trial & errors happen in the original original.  The second one's kind relaxing.

I absolutely loved the first "Hand in Hand," and I was thrilled when I was asked to do it again and give the girls blonde hair.

Why do I avoid faces?

Is it because I love the story that can be told from the back or side as if you're looking in on the story?  That's an answer I've given.

I think, however, that's only a partial truth.  I think the more accurate reason is that faces are just plain hard!
The challenges that come with making a white canvas look like a specific person keep me humble, remind me that my skills are limited.

I "finished" this precious little girl a few days ago; however, I could tell from my husband's polite reaction, that it really wasn't finished. Because I was frustrated with her for not cooperating, I literally put her in the corner for a few days.

With fresh eyes and spirit, I put her back on the easel, turned her upside down, and went began the plastic surgery... cut off some hair, lengthened an eyebrow, lightened a cheek... fattened a lip, lowered a chin..... almost.  But she needed one more go... squared a chin, added some mascara, highlighted a nostril, deepened a crease...

There  comes a time to say, "I'm satisfied. I love her.  I love the story this image tells."

This final stage is like editing - looking for what's wrong.
There are several strategies that I use to help me "see" better.

** Leave the room and come back.  When I imagine seeing it for the first time, I can be more objective.

** Ask a friend what they notice first.  Usually if something jumps out first, it's shouldn't be there.

** Take a picture of it, and put it on the computer screen.  It's like a fresh view where things show up that I just wasn't seeing on the canvas.

**Look at it in the mirror.  Sure the reflection is backwards, but it's amazing what I notice that I didn't see before.

**Turn it upside down.  This takes the "person" out of it and just lets me concentrate on colors, lines, and shapes. 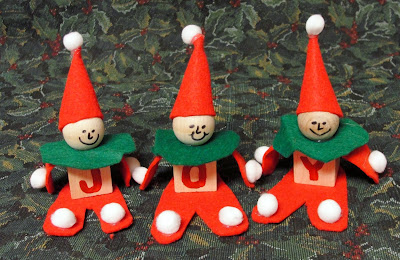 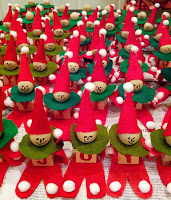