My Birthday Card - Art by a New Artist 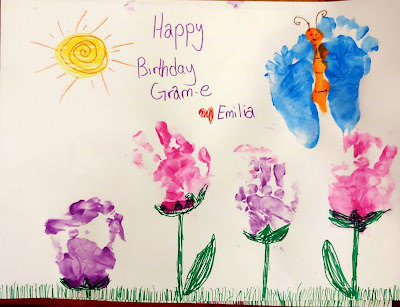 This is the best, Best, BEST piece of art that I have to show you today! 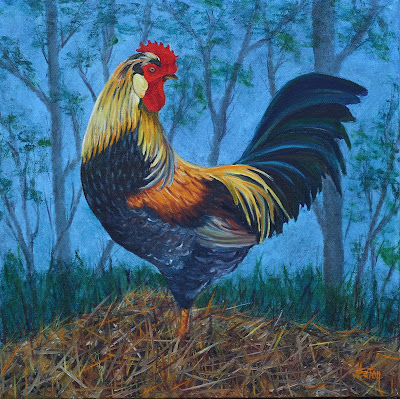 Isn't he absolutely fabulous!
And, doesn't he look like he knows it!

I so want to make him be a book character so that he can talk to us!
We don't have a book, but I bet we can make him a character...

I'll name him Rey... short for  Rey K. Javic.  He'd have gone out just before the sun had shown itself.  I'll put him at the top of the haystack to look around (perhaps a bit haughtily)... to survey his domain.  He'd grin for sure... (Wait... can chickens grin?) His grin would be kind of pompous, knowing he'd be the one to break the morning silence with his crow.  I think he'd love that.  First I'll have him strike a pose because he is quite handsome. He'll bask in the glory of his own handsome-ness for just a moment... or two... a moment too long... because a someone else will be up early...It will be a weasel... no two... wait... it will be a whole "passel of weasels!"This might not end up being a good morning for Rey...

I'm not much of a made-up story writer, but I see a possibility here!  Hmmm... but only if the "passel of weasels" get some really good lines of their own.  Of course, someone will need to learn a lesson... probably that cocky Rooster Rey.

Where did that all come from?
Well...
Occasionally I come across a blog that I thoroughly enjoy.  It may be the writer's topic that draws me in, but it's always her voice that keeps me reading.  Every so often I will go aaaalllllll the way back to the beginning of that blog and read it straight through from the beginning to the present.
Blogs are written in present tense, like journals... in the now.
I think there's something magical about that present-tense voice.  It transports the reader back in time... to read along until the past (which feels like the present) becomes the real present.

So...
With that long and convoluted explanation, that is how I met this rooster. (And, my goodness, he is gorgeous!)  I saw his photo and kept clicking back to look again.  Finally I contacted his owner, my new blog friend Amy, and asked if I might use his photo as a reference for a painting.

I don't know much about this particular guy.
I know he's from a breed called Icelandic Chickens.
If he was gentle and behaved, I bet he fathered lots of little chickies.
If he was kind of a jerk, I bet he made some fine dumplings.

As for the story character... you see, Amy wrote another post about some unsavory characters that did not make life pleasant on their beautiful farm for a time.  She said they were weasels, a passel of weasels. She said that someone should write a story with that title.  Sooooo.... if you're reading, Amy, I'd love to learn the fate of these guys!


What would my happy little hens think if I brought this beautiful Rey the Rooster home!

I've been wanting to do another triptych for a while, and this seemed to be the perfect opportunity.

The Indian paintbrush is a pretty little flower... although it's not very showy on its own.  Even though it's a little scraggly and spiky so that you're not sure whether it's a pretty weed or a pitiful flower, I wanted it to be the main character, the most beautiful, the focus of the piece.   The butterflies think Indian paintbrush flowers are gorgeous.  They're fluttering around to help us as we celebrate the beauty of the Indian paintbrush.

This is the third of four painting for the bedrooms of Welcome Home Retreat. 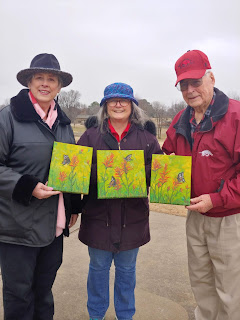 The first was for the Bluebonnet Room.
The second was for the Primrose Room.
Actually there's another.  A while back I did this one for the tiny private room, the Wisteria Room.

Pink Primroses on the Porch 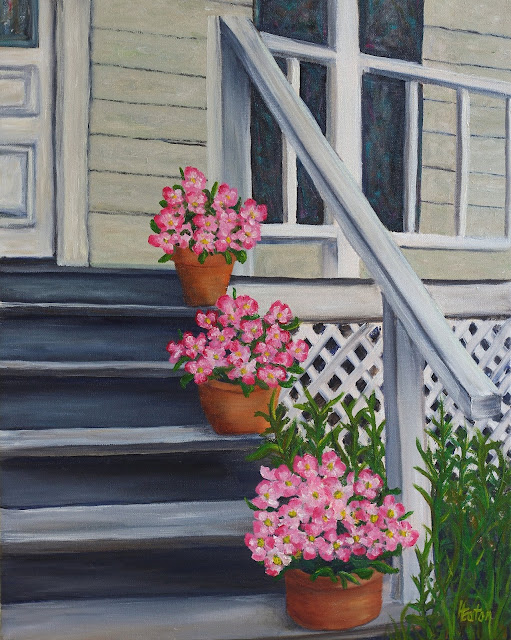 My instructions for this painting were short and open ended, "It needs to be a painting about pink primroses, and it needs to be big."

Okay then... Let me think...
What does a primrose look like? It's a really small flower...  A field of primroses would look like a bunch of pink blobs or sprinkles on a green background...
How can I make the primroses tell a story, be the star of the painting, and still be normal size? I need a background that will be important but not steal the show.
How about a white-ish house... with a white-ish door... and a white-ish rail... on a white-ish porch... beside white-ish lattice and white-ish steps...
Oh, and green plant leaves to fill space and cover up all the places where I couldn't make the edges of the steps look right... I mean... to add a complementary color and organic texture to the background.

This is the second painting that I did for one of the bedrooms of Welcome Home Retreat.   It's for the Primrose Room, of course. You can see the one for the Bluebonnet Room here.

These pretty pink primroses are singing, "Come up these steps!  There's a friendly face just inside the door and a porch swing just outside the edges of the canvas.  Sit down and enjoy. Don't be in a hurry."

I do love a good porch. 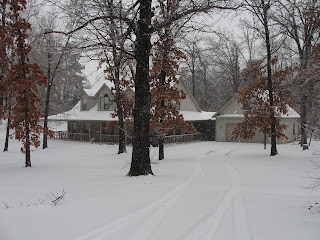 I do have a good porch.
It wraps around.

If you come, we'll have to make a choice....
The rocking chairs in the front corner?
The swing in the other corner?
Or the gliders in the back? 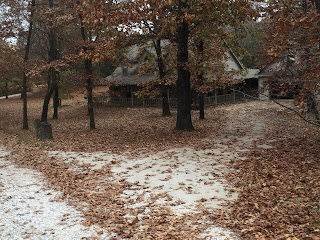 And... If you happen to have enlarged and zoomed in... yeah... that's Ron's Harley on the front porch...  Sorry about that... kind of makes one question whether we're rednecks with our vehicles parked on the porch... That's not it's home, he just had it parked there. 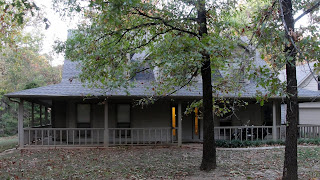 View from My Art Room 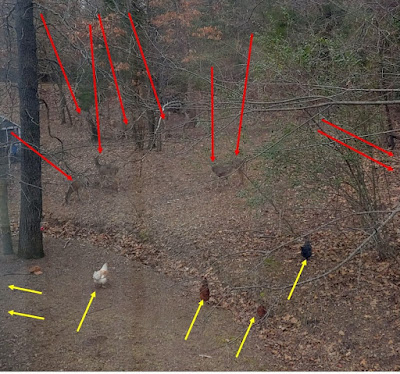 This morning I'd been at it a while and needed a fresh look at the mess I was making on the canvas painting I was working on.
I got up, stretched, walked over to the window, and... Oh goodness...
My backyard was a busy place...
9 deer, 6 chickens, and 1 cat.
Everyone was just as happy as they could be.
All the Eaton animal family members get along just fine.
Posted by Helen at 7:13 PM No comments:

Email ThisBlogThis!Share to TwitterShare to FacebookShare to Pinterest
Labels: backyard 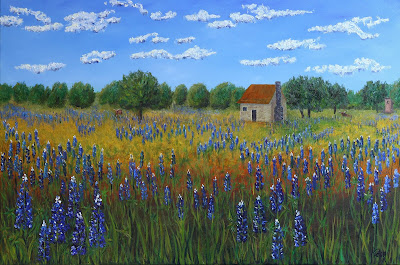 Texans love their bluebonnets.  About this time of year photographs of fields covered with them begin to show up on Facebook. People plop their babies in the middle of them to take their pictures.  Couples get their engagement photos with bluebonnets all around.  It's clear why... they're simply, unbelievable beautiful.

Ok... I have to come clean... deep breath... I have never actually seen bluebonnets growing in a field!
I know!  I know!
I just haven't ever been in the right place at the right time! (I know my friend Karen is probably gasping in utter disbelief and disappointment.)

Although when we were in Maine, the lupines were everywhere, and I couldn't take enough pictures of them. (I think bluebonnets and lupines are in the same family. So, does that count?)

I was asked to paint four large paintings, one for each of the main bedrooms of Welcome Home Retreat.  I started with this one because I had the idea for it.

Not long ago I painted a field of blue flowers and loved the perspective the depth, so I decided to use that as my model.

I didn't have one reference photo to use, so this project was a series of making it up as I went along.  (That is not at all how I usually paint, but I had an idea and a confidence that I could pull it off... or at least a back up plan that I could paint over it if it didn't work.)

The trick to finishing this painting was simply getting enough but not too many bluebonnets.  I think there are about 13 zillion... at least it felt like it.

I keep thinking that this whole painting was made from trial and error... but honestly... it all worked!  Everything I tried... well... turned out the way I'd hoped!  That doesn't happen very often!
Nothing really went wrong... wait... ummm... there was one thing that did go terribly, terribly wrong during the process of painting this painting... If you haven't already, you really must read "A Painting Disaster Story." 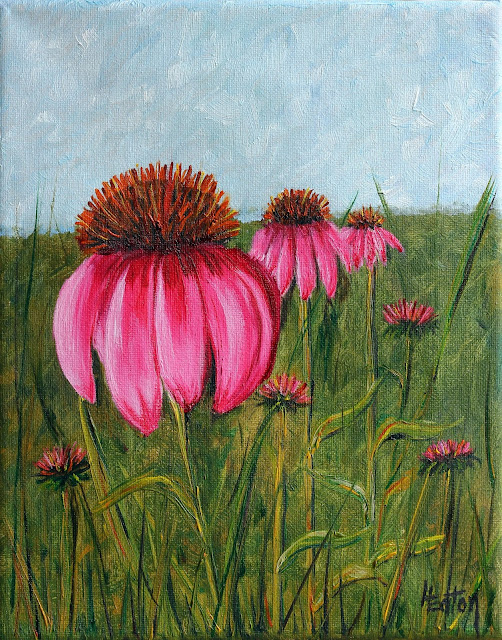 I celebrated 12 years as a painter last week.
In honor of that, how about 12 things I love about painting: