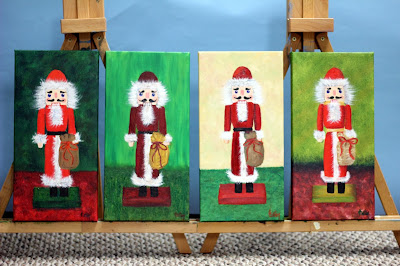 I have a lot of nutcrackers that I've collected over the years. Some of them are quite ornate and fancy, but this one is probably the simplest one that I have.  He's also my favorite.  From Thanksgiving to New Year's, he stands on the windowsill beside the fireplace.
It was fun to paint him in four different ways.

Original Oil Paintings on 6"x 12" Wrapped Canvas
These were painted for an upcoming Santa-themed art event, but for now they're available in my Etsy shop.  Click here if you'd like to purchase one.
Posted by Helen at 9:02 PM No comments:

Thinking about Christmas in August?? What??
Well, it seems like I'm always painting "in season" when the mood feels right, but by the time I finish, the season has passed.  This time I got a head start.  My art friends and I spent the weekend at Welcome Home Retreat where I had a three goals: 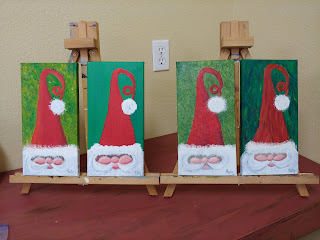 Original Oil Paintings on 6"x 12" Wrapped Canvases
The third one can be found for sale in my Etsy shop. Click if you want to purchase him.
The other three are  [SOLD]
Posted by Helen at 2:48 PM 2 comments: 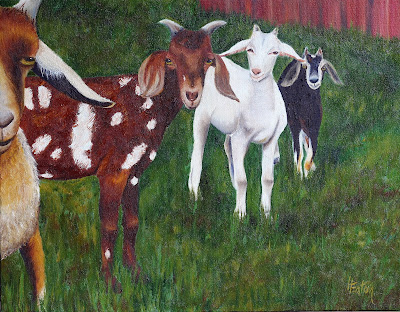 Who's the Greatest Of All Time?

Ok... that little exercise had nothing to do with these guys, but it was fun to come up some G.O.A.T.s for the list.

These 3.5 goats were my dad's neighbors a few years ago.  The teenager who lived next door to him raised goats for his 4-H project.  They were funny and friendly. And who doesn't love a funny goat!

So... if you're wondering about the 1/2 goat on the left... When I was taking the picture of the other three, he literally butted in and photo bombed the shot.

I worked on and "finished" the painting without him, but I never felt satisfied with the painting as a whole.  My painting partner / daughter-in-law said, "Put that other half a goat in!!" Turns out he's the star of the show... the G.O.A.T!